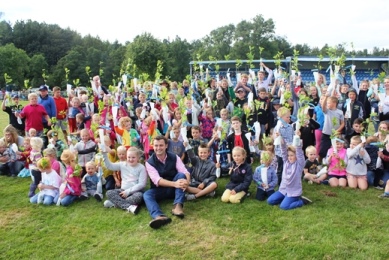 A&J Scott were delighted to team up with the Glendale Agricultural Society at the recent Glendale Show to mark the Society's 125th Anniversary, providing 125 school children with 125 oak saplings, in conjunction with local supplier Cheviot Trees.

To mark this major milestone GAS invited local school children to be part of the ‘Glendale Great Oaks’. Each of the 125 children were presented with a tree by A & J Scott to take home, plant and watch grow into a mighty oak.

Having been involved in the Glendale Show and the Children’s Countryside Day for many years Robert Scott, Managing Director, pictured right with the children, gives background to their involvement in the ‘Glendale Great Oaks’ initiative: 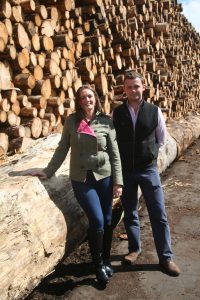 “As a leading timber business and sawmill in the area, we are delighted to be supporting this initiative for the 125th anniversary of the Glendale Agricultural Society.  The longevity of the oaks, which we hope will be planted throughout the area, are a great symbol of the endurance of the Society, as well as giving the children a valuable insight into nature and hopefully encouraging them to have a life-long interest in trees.”

The Oak saplings were presented to the children at the popular annual Glendale Show, over the August bank holiday weekend.

Rachael Tait, GAS Secretary, pictured left with Robert Scott, said: “It is only with the continued support of sponsors such as A&J Scott that the Society and the show has continued for the last 125 years, and with their support we hope to be here for at least the next 125 years!  The natural synergy between the ‘Glendale Great Oaks’ and A&J Scott Ltd has lent itself very well to this project.  As a company they employ over 160 people from the local Glendale community, and they continually support the Glendale Economy.”